Sometimes you plan things and they don’t work out how you imagine them.  This is a project like that.  I originally made the centre blocks (bits with pattern) about 8 years ago I think.  I had gotten it into my head that I could just hand sew a quilt.  I bought a kit and got started.  Hand sewing takes ages and I am not patient.  I managed to sew two of these blocks that are about 6″ squares.  They were a bit wonky but done.  I also had four 12″ blocks that I managed to sew with a machine but the machine and I were not friends and the relationship ended badly.  Fast forward 8 years and I have had the notion to try again.

I don’t have all the pictures.  I started this project a few weeks ago.  My daughter bought some calico in cream for me to use as backing fabric.  I decided that the blocks on their own were not big enough for the potholders I wanted to turn them into so I added in a border.  I tried and failed a bit.  Ripped out seams and added new ones in.  I wasn’t sure what I was doing but in the end I got it done.  What I should have done was cut a couple 2″ strips the length of the block I already had and sewn one to the top and one to the bottom of the block.  Then I should have cut a couple more 2″ strips the length of the new block sides and sewn those on the sides.  I would tell you how I erred but I don’t want to confuse you.  Do it the right way and if I am wrong on the right way tell me in the comments!

So at the stage I started taking pictures I had a block that was about 10″ square and backing fabric cut to about 12″ square.  Now a sensible person would probably measured a potholder and found about what size that is…I am not a sensible person and just imagined what seemed correct.  Measure guys!

Now since I already had these bits made up and ready to go the next step was cutting the wadding.  I got fusible wadding because the first and only quilt I have made used regular wadding and the quilting process was a buggered up nightmare of epic proportions.  Below you will see my measured, cut, compared to the block and cut some more wadding.  I sandwiched it between the front and back layers and ironed both sides.  I did attempt to get a picture of me ironing the front as well as the back but with my amazing abilities to mess things up I did a 1 second video instead of a picture. 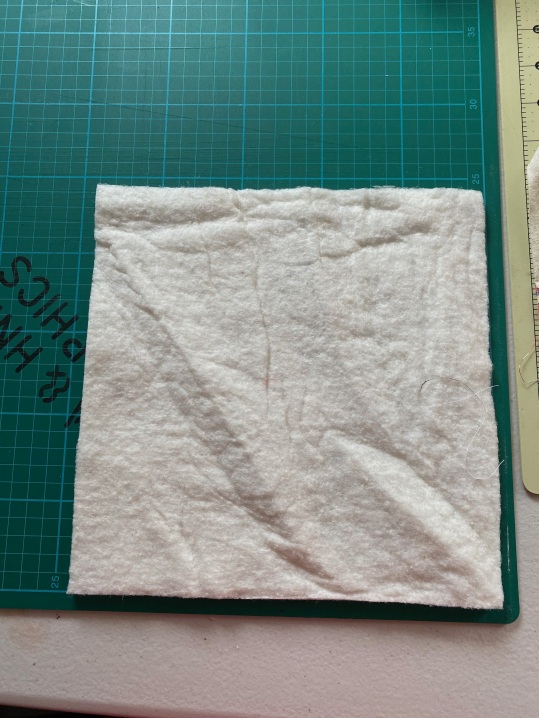 The potholder is now a top, wadding, and back sandwich and all sticking together nicely so I quilt.  Again, I am an impatient sort so this is machine stitched.  I decided to just do lines.  Honestly, lines are about all I really know how to do so far so despite having grand ideas before sitting at the machine I went with what I know.  I started in the middle because someone in some YouTube video said to do it that way and so I did. My lines are reasonably straight but not evenly spaced.

Binding!  I find binding a bit scary.  I did the worst attempt at binding with my first quilt and so am a bit shell shocked by binding.  This one is a folded over binding….I used the backing fabric and just double folded the sided, pinned it and sewed it all down near the edge of the last fold.  This binding was so very much more successful that, though I am not healed of the biding trauma, I feel so much more confident with doing this all again.

So there is the finished products next to each other.  Yes, they are different sizes.  The original hand sewn blocks were not the same size.  Also, when I was trying to attach the borders, I tried to get perfect right angles and trimmed a few times before accepting tat I am not a right angle person.  So yeah….one block got a bit trimmed within an inch of its life.  What else is less than ideal?  These potholders don’t have loops to hang them but that is neither here nor there to me.  They are however HUGE for potholders but too small for placemats.  I am thinking they would make for nice hotpads …. at least that is what I think they are called (please correct me if I am wrong as I can only learn if I know).  Something to put pots and baking sheets on when they are hot…like a trivet but fabric.  Probably using the word wrong.

UPDATE: I gifted the larger one of these to my Mother in Law and the smaller kept for myself. I thought I would show you how I use it as a mug rug.