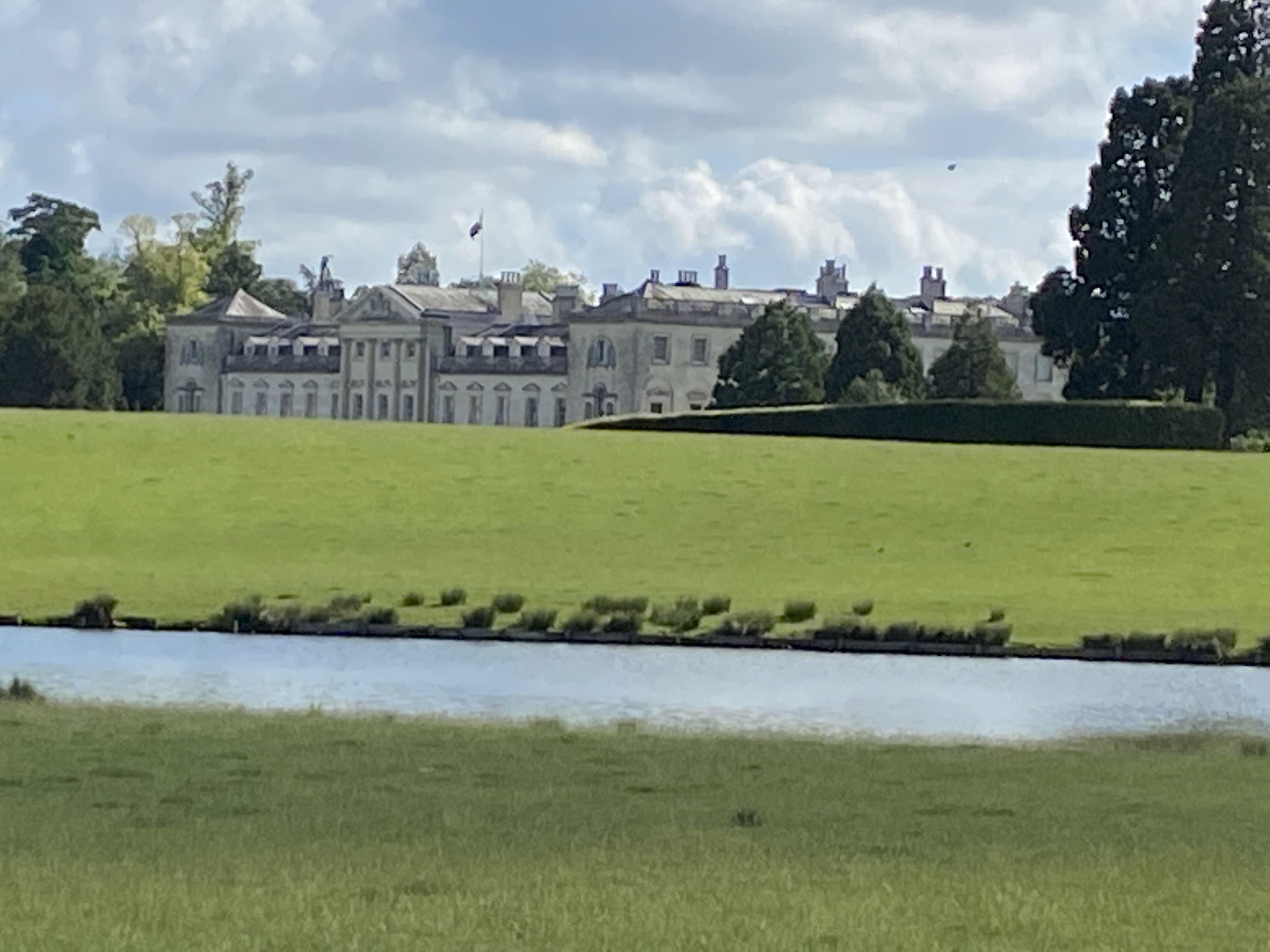 We found an 8 mile walk around Woburn Abbey on Northamptonshire Walks which is rather funny considering that Woburn Abbey is well inside of Bedfordshire. They have some lovely pictures and the details of the correct walk… in the end it was not quite the walk we did. This walk was written up five years ago and things did change just a bit. It was around about his step 13 when things went awry. The way markers are not as easily found anymore, a stile is no longer there, and there is a new bit of young woodland planted in the last year or two.  We did still manage a 7 mile walk though which is the most I have done since the lockdown started.

We started off at a rather big carpark across from the church.  We got an early start but even when we got back at around 11:30am the carpark still had space.  As Woburn is a busy village we were worried about the parking but all was well. Out of the car park we turned left toward the village centre and then left onto the main road away from the village.  We followed the path along the road until after the first good view of the Abbey and at a little gate house.  There is a gate to a path that has fencing on both sides.  Not the prettiest of paths but it gets you into the estate. Once in the estate there were clear way markers to follow.  At this point you are in the deer park so there is poo but it is a beautiful place. 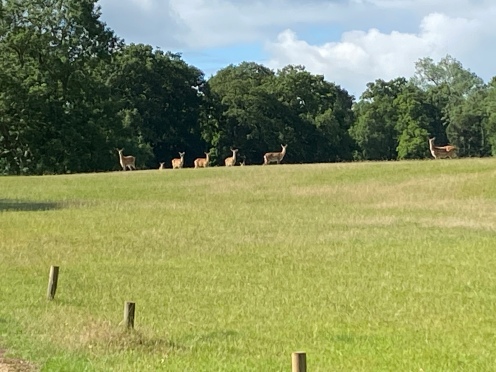 We carried on along the way marked path and onto a little estate road.  It is up hill at this point but the path is good and the deer are wonderful. At the top of the road you can see a Tudor house (which is spectacular) and you will come to a junction…ignore the road and make your way to the footpath tat goes into the wooded area.  Out behind the house you reach the outer wall of the estate.  Go through the gate and follow the paths to the left keeping the wall on your left and in sight. There was a sheep farm on our right at one point along the way. 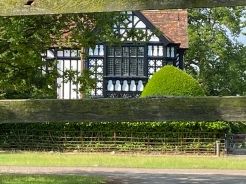 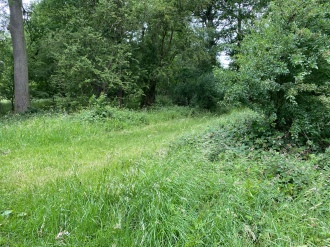 It was shortly after the sheep farm that we had some trouble with the directions.  The way markers disappeared and we never found any stiles.  we doubled back and tried again but no help really.  There was a junction with three paths off.  One went left to a new woodland planted recently, middle went up a hill, and the path to the right we didn’t try.  The first two both could lead to the field that was referred to I think but we were not sure of the left most path ad we missed the turn into the field from the middle path.  Continuing on the middle path we did eventually get to a fence line, turning right and watching the fence we found a gate onto the road.

At this point we were a bit worried and didn’t really know where to go.  If we had not gotten lost the path would likely have been evident as we did find the other end of it where the official walk joined the same road.  Just at the road before pushing on I did check maps and found we were just outside of Eversholt and the road name appeared to be Wit’s End. I shit you not….we got lost, started to get worried and found ourselves literally entering Wit’s End.

We walked down the rather empty country road for less than a kilometre before we discovered the correct path coming out at a farmhouse.  At that point we were feeling much better about things.  My husband had also cycled this area last weekend so recognised where he was which was also very helpful.  We went back to following the directions from Northamptonshire Walks.

I should have taken pictures of Eversholt.  It is a beautiful village with wonderful homes, cricket field and village hall.  We walked along the road (now on a footpath) up for quite a ways until we came to a left turn across from a beautiful Tudor cottage in white.  The new road did not have a path but it wasn’t too terribly busy either.  This road leads directly back into the estate with the safari park on the right eventually.

We were pretty tired at this point as my husband is having some hip trouble lately and I haven’t walked more than 3 miles at a time since early March.  We walked back up to the estate.  There is a cattle grid but the pedestrian gate is on the left.  This is where we diverted from the set walk.

The official walk turns right and goes around the safari park before heading up to the village and back to the carpark.  We just followed the road straight through the estate and back to the carpark across from the church.  I think it probably saved us a couple of miles.  Our previous diversion had added around a mile so that is how the maths had us finish on 7 miles.  The estate is truly beautiful though and on that last bit to the car we saw stags with HUGE antlers. Sorry, my pictures are not great as I couldn’t get close nor does my phone zoom enough. They are majestic creatures! 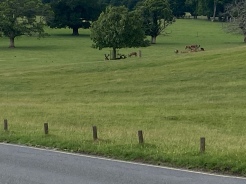 We exited the estate through the pedestrian gate next to the other cattle grid and walked back up to the church and back to the car.  The walk was 7.07 miles in about 2.5 hours.  The weather was beautiful and the scenery was well worth the tiredness I feel now.  The walk was longer but not a strenuous walk. There were a few hills that we were so happy to get to the top of but easy to moderate level on the whole.  There were several kissing gates along the way and uneven ground so not disabled or pushchair friendly but very nice for a trail/ road running combination if you are so inclined.

I will leave you with a few more pictures and wish you a wonderful day.  Walk on my friends! 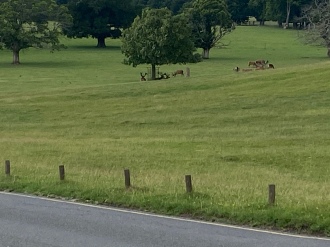 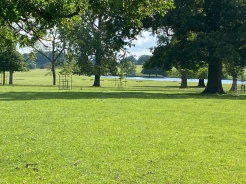 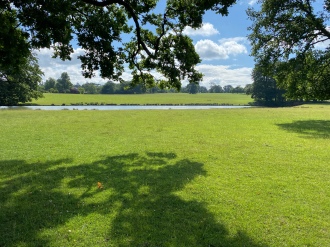